Tips for driving with a kid 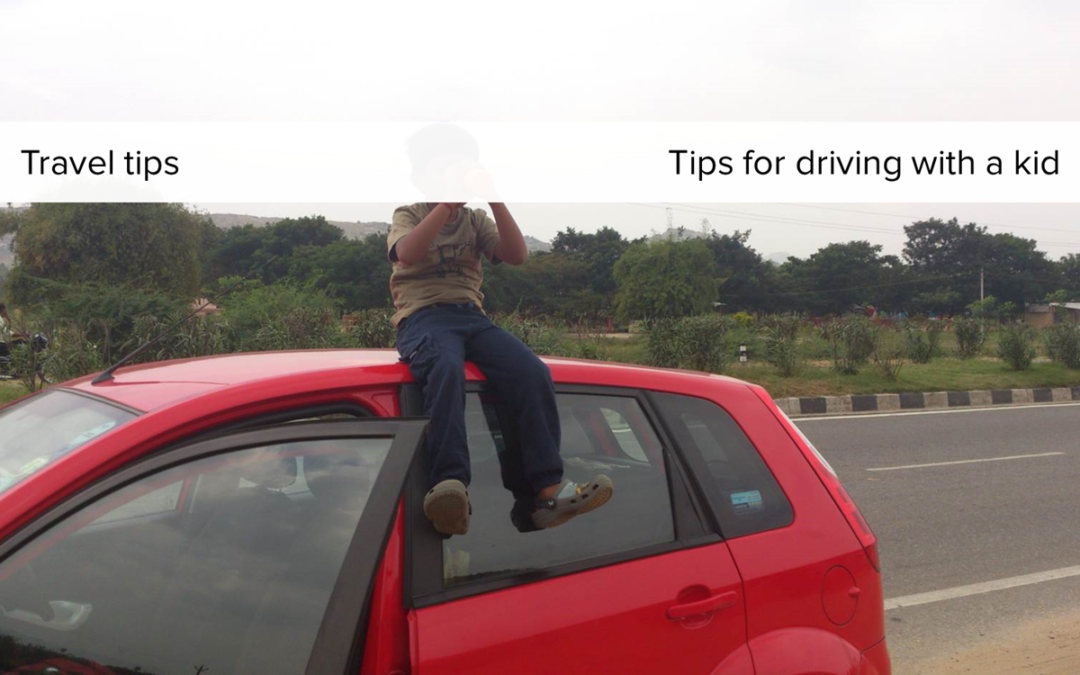 Road trips are my favorites any time, but next to flying in my son’s opinion. However road trips always pose the challenge of keeping his ten year old self occupied while my attention is mostly on the road. Dwindling attention makes him prone to throwing tantrums.

During our initial trips I had to plan it in such a way that most of the drive overlapped with his bedtime, so that he wouldn’t get bored during the drive. This caused more inconvenience than benefit, night drives and forcing sleep timings on him. This made me realize that there is no way around keeping him engaged during my drives.
The ideas I am sharing here are from our 10000+ kilometers of road trips done in 4 years. 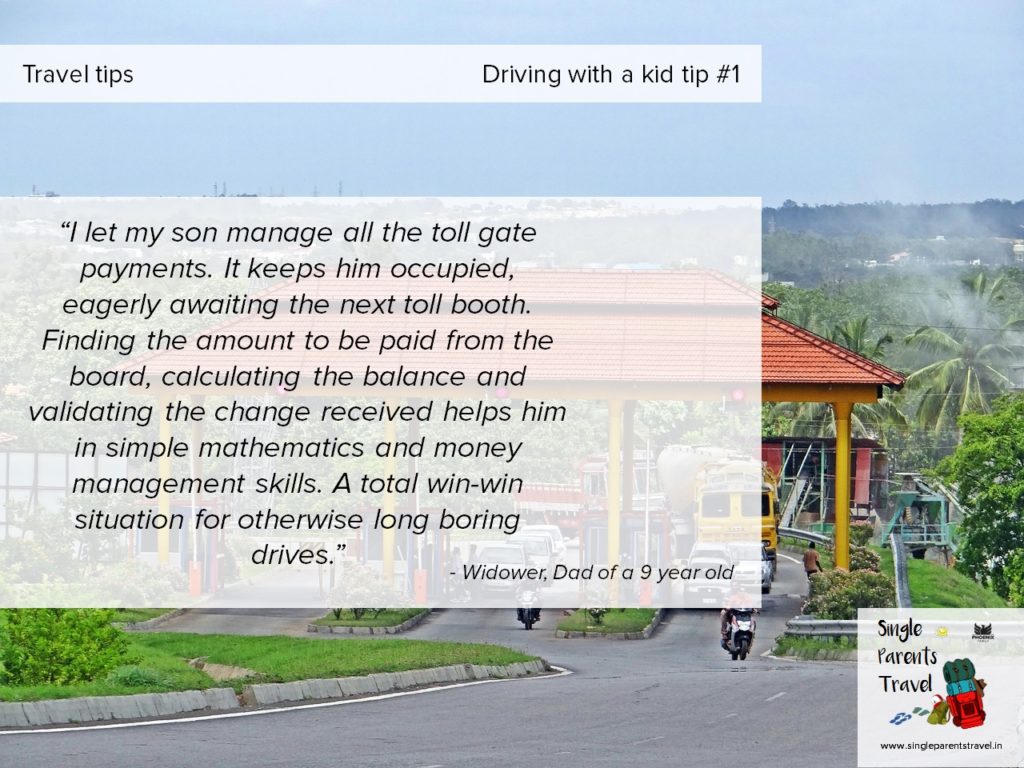 Tip #1: This was the first idea that struck me during our early drives and best idea to engage him till date. He was 6 years old then. I let him manage all the toll gate payments. It keeps him occupied, eagerly awaiting the next toll booth. The activities evolved slowly with time. First it would be finding the correct amount to be paid from the board and rendering a change close to the amount. Then slowly stepped it up to calculate the balance and validating the change received. This was his stepping stone to start on simple mental mathematics and money management skills. As a side effect he spends time exploring through my purse and starting short conversation on visiting cards found. A total win-win situation for otherwise long boring drives. 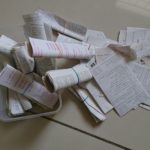 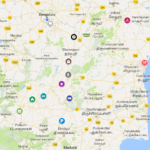 As a post trip activity, we maintain all the toll gate receipt. Spend time segregating by the tolls we passed through. Recently tried teaching him some statistics in identifying the tolls we have passed through the most and arranging them in the order of visit. I would not say it was successful, but he enjoyed creating a custom maps on Google playing with new icons.

We used Google maps extensively even on routes we know by heart. He was my official navigator reading out upcoming turns and updating time to destination. But found him sneaking some extra gadget time using this as an excuse. And it did not help in much of interaction. There were some interesting moments with maps as well. Like once we were driving from Noida to Nainital and our mobile battery drained out. The charger in the car did not work. He got super worried that we would never make it. We did manage to reach our destination by asking bystanders for direction. Watching him talk his cute Hindi for directions on that trip, gave me an idea to try no maps drive. We started on known routes asking him to watch for mile stones and road signs. Now we have a full no maps rule during our drives even on unknown routes by asking for directions.

Of course there are cases we are forced to use maps to navigate. Like the time we tried to capture the driving directions on paper and the whole idea was a flop. We ended up making many wrong turns and losing a lot of time. 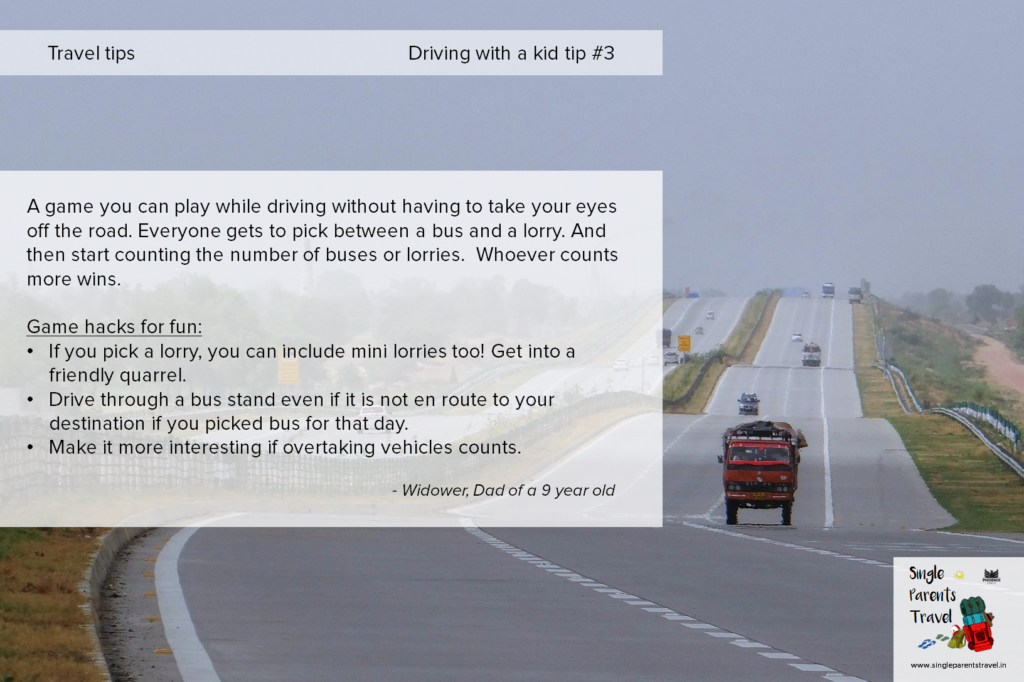 This is a game I remember playing during my childhood days. And the very fact that I remember it even now, wanted to try this with him. Must admit I could not sustain this for long. We probably played it in very few trips. Whatever time it lasted, we both enjoyed it immensely. A game I was able to play while driving without having to take my eyes off the road. We pick between either a bus or a lorry. And then start counting the number of buses or lorries we cross. Whoever counts more wins.
Tried few gimmicks to add fun to the game,
If I had lorry, I will start counting mini lorries too! And have a good friendly quarrel.
Drive through a bus stand even if it was not on our way if I had bus for that day.
Initially it counted only when the vehicles we are counting are from the opposite direction. I tried to make it more interesting to include overtaking vehicles. 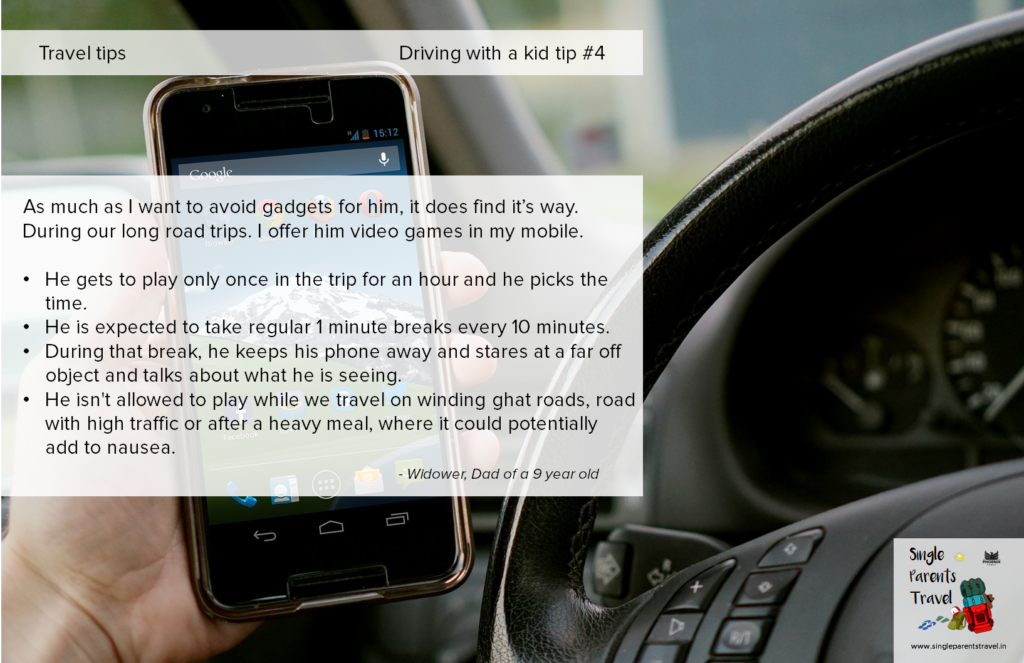 This is the brahmastram or silver bullet I hold when the boredom takes over him and number of ‘when shall we reach’ question repeats. He has a very restricted access to gadgets at home. So I wanted to keep it that way during our drives as well. He gets to play a video game on mobile for a maximum of an hour. He gets to pick what time of the drive he would like to use it. That playing time comes with a restriction of taking regular breaks for every 10 minutes. He has to turn off the screen, keep the phone away and stare at something far off. And being smart, he would try pulling off some naught behaviors here and there. So I would ask him to explain what he is seeing. He is not allowed to play games while driving on winding ghat roads, road with high traffic or after a heavy meal, where it could potentially add to nausea.